Skip to content
My gut-wrenching disappointment with most of the mid-term election results has subsided to a dull ache. I keep reminding myself, “Voters get the government they deserve.” Maybe someday enough people will realize the importance of the mid-term and local elections to change the status quo. I sure hope so.

In any case, it’s time to move on, and I’m turning the attention of Sparker’s Soapbox to the Collier County School Board. What effect will new members Erika Donalds and Kelly Lichter have on District policy and Board operations? As I’ve shared in the past, there’s reason to be concerned.

Last Tuesday, Donalds and Lichter were sworn into office, along with Roy Terry, who was elected to a second term. (Board Members Kathleen Curatolo and Julie Sprague were most recently elected in 2012; their terms will end in 2016.) 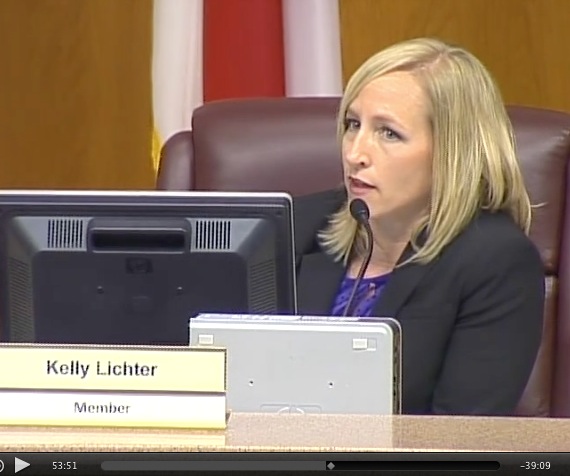 Yesterday, and again today, I watched the video-on-demand replay of this new Board’s organizational meeting. I didn’t attend in person because I had assumed, based on the Agenda, that the meeting would be uneventful. Boy, was I wrong.

My head is still reeling, not so much from the results of the votes that were taken, but more from the tone of several of the interactions between Board members, members of the audience, Board attorney Jonathan Fishbane, and Superintendent Kamela Patton. Already, I fear a repeat of some of the Board governance issues that resulted in the District being placed on “warned” status by the accreditation agency. For more on this, click here.

The meeting began at 8 AM. I estimate that the auditorium was about one-third full, seemingly (based on their later behavior) with supporters of Donalds and Lichter. 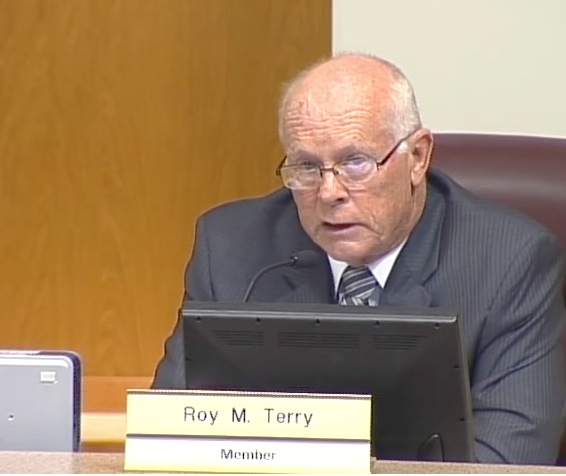 After the swearing-in, the next item of business was “Election of Officers.” Terry nominated Curatolo to be Chair. Lichter nominated Terry to be Chair. Terry declined the nomination, saying he appreciated the support. There was no discussion. The vote was taken.

All those in favor of Mrs. Curatolo for Chair, say aye. Those opposed, say nay. The vote was 4 to 1. Kelly Lichter cast her first vote as a School Board member against Curatolo.

The next item on the agenda was “Meetings and Times.” To put what happened in context, it’s important to know that over the summer, Donalds and Lichter, along with defeated candidates Jacob Winge, JB Holmes and Thomas Andler, signed something called “Contract with Collier County, Florida” drafted by local attorney and parent Doug Lewis. As reported by the Naples Daily News, Lewis “issued a challenge to all candidates to sign his contract, to indicate support of initiatives he deemed important. From emails obtained by the Daily News, it appears Lewis got involved and began reaching out to candidates after the approval of Superintendent Kamela Patton’s contract extension this summer.”

We, the undersigned candidates for [School Board], publicly declare that, with 3 seats being contested on August 26, 2014, a new School Board majority will have the authority and ability to pass major reforms described herein…. Further, we solemnly pledge that, during one or more of the first 3 regular Board meetings after our election…, we will bring up for vote, the following major reforms…

This least-troubling of the seven “reforms” listed in the “contract” fit right into the agenda:

Require Board meetings to commence on or after 5:30 PM in order to give all parents and working taxpayers the opportunity to attend and participate. 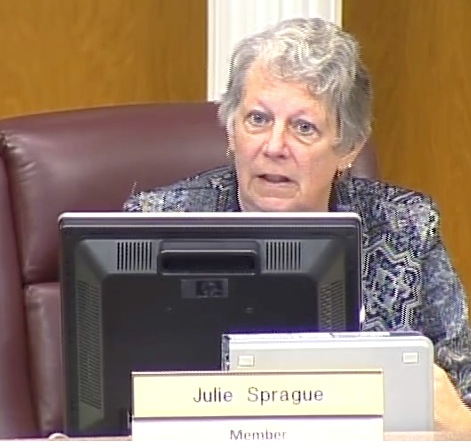 Community members Joseph Doyle and “contract” author Lewis, speaking during a public comments portion of the meeting, requested a 5 or 5:30 start time. Lichter made a motion that meetings start at 5 PM with the business meeting starting at 5:30 PM.

During the Board discussion that followed, Curatolo and Sprague offered some historical perspective, explaining why the current 4 PM start time had been chosen in the past, which I found helpful. These are some of the things they mentioned: 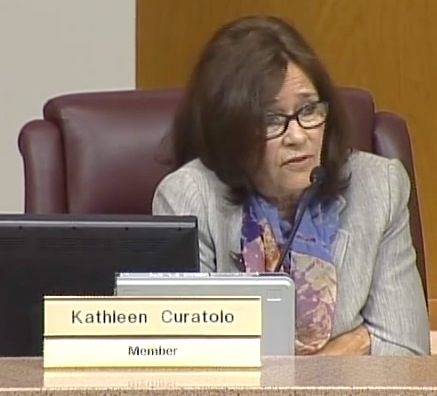 Lichter said, “I just keep hearing a lot of what’s happened in the past, and I think we have to focus right now on moving forward …, and I think that’s why I’m sitting here today. So I ask that we listen to our constituents on these concerns and [look forward, not backwards.]

Curatolo replied, “With all due respect, Mrs. Lichter, that’s why we’re ALL sitting here today.” Her comment was met by jeers from the audience.

Almost 20 minutes later, following another comment by Curatolo about the meeting start time, Lichter was recognized by the Chair to speak. Here’s my transcript of what happened next:

Lichter: Before I have my discussion topic, Ms. Curatolo, I respectfully ask, now that you are Board chair, please stop with the condescending remarks and the disrespect that I often see you give public speakers at meetings. This is a new time. [Applause from audience]

Patton: Again, I ask you to hold your applause.

Lichter: We heard public speakers today, and they, and I’ve heard it multiple times at these meetings, and maybe for you coming to these meetings is just voting for things, but it’s about listening to the public, and this is what we’re hearing…. [Applause]

Fishbane: I think we .. Ma’am, I think there’s a civility issue…

Fishbane: I HAVE spoken to Ms. Curatolo….

Lichter: So we should just call the motion.

It was disturbing to watch. I was distressed by the way Lichter spoke Curatolo. While watching the meeting, and going back over this exchange in particular, I did not experience her as condescending. Rather, I saw a sincere desire to help the new members understand the decisions made in the past. Lichter’s “Please stop with the condescending remarks” was itself, in my view, condescending AND inappropriate. I was also surprised and disappointed by the hostile way several audience members behaved.

The discussion continued, with Terry commenting:

Whether we like it or not, even though we make decisions here [presumably a reference to Lichter’s comment about “just voting for things”], the focus of this Board should be on the students of this District. This doesn’t mean we don’t listen to parents and other people and take that into consideration. But the reason [the meeting start time] was put at 4:00 was basically to involve the students in the meeting, and I can honestly say to everybody involved that when students do participate, … they take a good deal of pride …

To which Donalds responded:

I’m actually shocked at the pushback on this item, and the importance that students’ performing is playing in this decision. I absolutely value students performance and showcasing what they’re learning. However, parent involvement is the number one indicator of student achievement. That is what we should be concerned with…. I’m surprised, Mr. Terry, because I know that you did support having later meetings in the past.… I don’t understand the change of heart there, and I’m really disappointed with the focus on performances and students hanging around, when the business of the school district – in your own words, what the state charges us to do, is what we should be concerned with.

Ultimately, the motion to move Board meeting start times to 5 PM, with the business portion of the meeting starting at 5:30, was passed 3 to 2, with Donalds, Lichter and Terry voting for, and Curatolo and Sprague voting against.

The vote was met with loud applause and cheers from the audience.

With that vote, one of Lewis’s “Contract with Collier County’s” seven “major reforms” was achieved.