By far, the top story in state government this month was Hurricane Irma, which made landfall in the Florida Keys on Sunday, September 10, as a Category 4 storm with 130 mph winds. By all accounts (here’s one), its wind speed and evacuations were orders of magnitude worse than some of the biggest hurricanes in recent decades.

As one who experienced it first-hand, I think Gov. Rick Scott deserves praise for his decisive leadership and the state’s overall response before, during and after the event.

I’ll begin this post with a review of the Governor’s actions related to the hurricane. Then I’ll share some top stories, editorials, and commentaries.

On Monday, September 4, Gov. Scott declared a state of emergency for all 67 Florida counties.

The next day, he asked President Trump to declare a “pre-landfall emergency” for the state to “provide important resources and assistance from the federal government” and “free up funding sources for emergency protective measures such as shoring up beach dunes, building emergency berms and planning for potential evacuations.”

He also activated the National Guard to assist with Irma preparedness, directed the suspension of tolls across the state to speed up evacuation, and ordered state offices to be closed Friday, encouraging state employees to volunteer to support the state’s emergency shelter mobilization efforts. He also began issuing daily Irma updates. In a news conference in North Naples, he urged Floridians to “prepare for the worst.”

On Thursday, September 7, he ordered all public schools, state colleges and universities, and state offices to close from  Friday through Monday, “to ensure we have every space available for sheltering and staging.” He also announced actions being taken to get more fuel to gas stations, and activated the state’s Disaster Fund to support individuals impacted by the Hurricane. 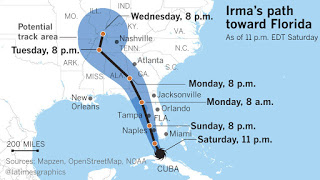 With the storm track making it clear that Florida’s west coast was in the line of the storm, on Friday, September 8, he urged those in evacuation zones along coastal counties from Manatee to Collier to be prepared to locate to the closest available shelter within their counties if they did not evacuate by noon the next day. I remember it well. The evacuation zone was extended as far east as Airport-Pulling Road in some areas!

On September 10, as Irma made landfall in the Lower Keys, Scott asked President Trump for and received, a Major Disaster Declaration for every county in Florida. This authorized federal funding to flow directly to Floridians impacted by Hurricane Irma, including families in Collier County. It also authorized federal reimbursement to local communities and the state government for emergency protective measures and debris removal.

Scott also publicly shared the “incredible outpouring of support” that had been deployed to Florida from twenty-eight states and Washington D.C. to aid in the response and recovery.

The Governor’s leadership continued as recovery began. On September 18, he directed every county impacted by Irma to “aggressively prioritize debris clean-up, and on the 19th, he directed VISIT FLORIDA to “launch an aggressive new marketing campaign to highlight Florida following Hurricane Irma.”

On September 20, Scott announced that the state was awarded “federal Dislocated Worker Grants to provide temporary employment to Floridians affected” by the hurricane. On the 25th, he activated 400 National Guard members to help with residential debris removal in Monroe County and directed the Florida Dept of Emergency Management to expedite delivery of tarps for patching roofs.

While the Governor’s leadership was commendable, the hurricane made apparent several issues that our state government must address in the months ahead. And there was some non-Irma related state news this month, as well. Here are some articles of note:

Stay tuned for my next post, where I’ll report on September’s local Irma-related efforts and other top local government and school district news.

Help me reach more Collier County voters by sharing this post with your friends. You and they can read Sparker’s Soapbox online at sparkers-soapbox.mystagingwebsite.com or subscribe to posts by email at tinyurl.com/subscribe-to-soapbox.