Collier voters’ State Senator will be chosen in November because only one candidate per party qualified to run in that race. The same is true for voters who live in State House Districts 80 and 106. But registered Democrats in House District 105 will have a primary because two Democrats filed to run for the seat being vacated by term-limited Rep. Carlos Trujillo.

In this post, I’ll briefly review who’s running to be Collier’s next State Senator and Representatives and how much money each has raised so far, to familiarize you with the candidates’ names and, importantly, the disparities in funding to-date. In the fall, I’ll do a deeper dive into the candidates who will be on the ballot in November.

All Collier County voters live in Florida Senate District 28. Incumbent Republican Kathleen Passidomo is running for reelection. She is being challenged by Democrat Annisa Karim. They will face off in November.

District 80 includes Hendry County and about a third of Collier voters. Republican incumbent Byron Donalds is being challenged by Democrat Jennifer Boddicker and NPA Dustin Alexander Lapolla. There will be a three-way face-off in November. 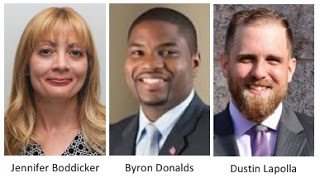 District 106, western Collier County, includes just over half of Collier voters. Republican incumbent Bob Rommel is being challenged by Democrat Sara McFadden. They will face off in November.

District 105 includes parts of Collier, Broward and Miami-Dade counties. Dominated by east coast residents, the gerrymandered district has only 14% of Collier’s voters, generally those living east of Collier Blvd., north of US 41 and south of I-75. As mentioned above, registered Democrats will choose between two candidates in August:

Javier Estevez is a native Miami millennial whose parents are Cuban immigrants. His website provides no other biographical information. He believes “it is time that we had a representative that speaks for us and stands alongside the community.” His issues are education, the economy, public safety, healthcare and the environment.

Ross Hancock works for a manufacturer of “energy-saving, sea-turtle safe” lighting products. He believes Florida needs to add clean manufacturing to its economy, and needs to invest in education to support it. He has a bachelor’s degree from USF and is an accredited Florida Master Naturalist. His campaign priority is “fighting for Florida’s environment.”

The winner will face Republican Ana Maria Rodriguez in November.

Take-aways
Expect lots of campaigning between now and November in the State Legislative races. Watch your mailbox for campaign literature, and pay attention to who’s paid for it; disclosure on the document is required by law. Ask yourself what the photos on the mailers are intended to convey. Notice if they honor or demonize government, and if they use words like Constitution, gun, immigrant, sanctuary city, second amendment, etc., to send “red meat” or “dog-whistle” messages.

Even if your state legislative seats are not on the August ballot, it’s not too soon to start paying attention.