With Election Day less than a week away, I thought I’d check in on how things are going. Bottom line: I’m concerned.

As of 4pm on Thursday, August 21, a total of 25,069 ballots had been cast. This represents only 14 percent of registered voters.

Bad as this is, it’s about half of the 25- to 28 percent turnout expected by Melissa Blazier, chief deputy supervisor of elections for Collier County.

In other words, half the people expected to vote in Tuesday’s election have yet to do so.

Since Republicans are by far the majority in the county, it’s not surprising that more Republican votes have been cast than Democrat votes. But look at the difference in voter turnout:

Democrats represent 24 percent of registered voters, but because of a much lower turnout, only account for 21 percent of ballots cast.

And Others – including No Party Affiliation – are even worse.

Where are Collier’s Democratic Party and Other (NPA, etc.) voters??

Which led me to ask:

Was my mail ballot received?

According to the Supervisor of Elections website www.colliervotes.com, my ballot was received and is being processed. I wasn’t sure what “being processed” meant, so I called the Supervisor of Elections’ office at (239) 252-VOTE.  I was told it was nothing to worry about; that if anything had been wrong, I would have  been sent a letter telling me so. Good news. Still, I will check back with this website on Election Day to make sure that my ballot was counted.

If you voted by mail, I encourage you to check the status of your ballot, too. Here’s how.

Go to www.colliervotes.com and click on Mail/Absenttee and then, in the menu to the right, click on Status of Request. See the photo below.

Enter your last name, birth date and the house number of your residence address where indicated, and click Submit. 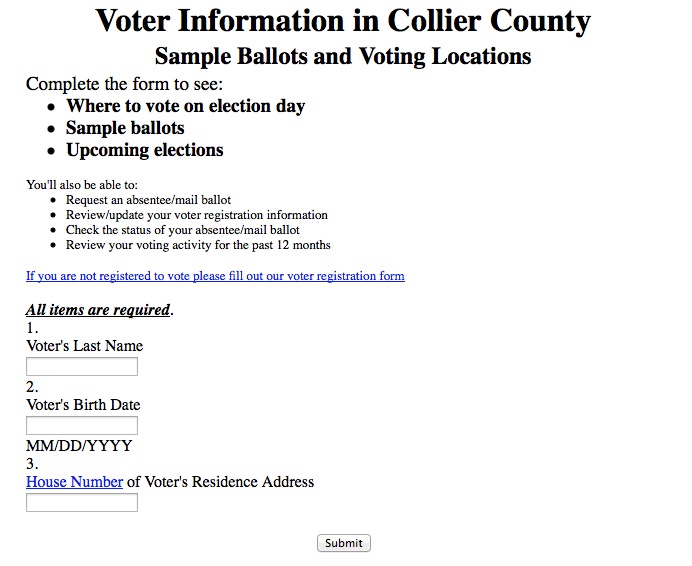 Or just call the Supervisor of Elections Office at 239–252-VOTE and ask if your ballot was received. If it was not, be sure to do what it takes to make sure it is! And do it soon!

The last day for early voting is Saturday, August 23. You can vote at any one of the eight early voting locations in Collier County. Find them by clicking here.

Election Day is Tuesday, August 26. On Election Day, you can only vote at your assigned local precinct. Find it by clicking here.

Remember: this is an important election – especially the School Board races – and much is at stake.

On another note: If you are receiving this post by email, did you know you can find an archive of all my past Sparker’s Soapbox posts online at https://www.sparkers-soapbox.com? If you know others who might be interested, please send them to that website, where they can sign up to receive future posts by email, too!