Skip to content
I care very much about public education. I am proud of the way our School Board returned civility and professionalism to Board meetings, after being on the brink of nearly losing the District’s accreditation because of the behavior of prior members of the Board.

For that reason, I was very disturbed to learn that Sports CLUB, parent/attorney Steve Bracci and Parents ROCK are appealing the decision a Florida judge reached a few months ago in favor of the School District after a year-long battle. The judge ruled that the District was completely within its rights when it approved the decisions of six elementary school principals to replace Sports CLUB with another after-school program provider.

Not only am I disturbed that our District and our School Board (which is also named in the appeal) are being put through this process, but I am concerned because one of the School Board candidates on the ballot now – Erika Donalds – is the founder of Parents ROCK. 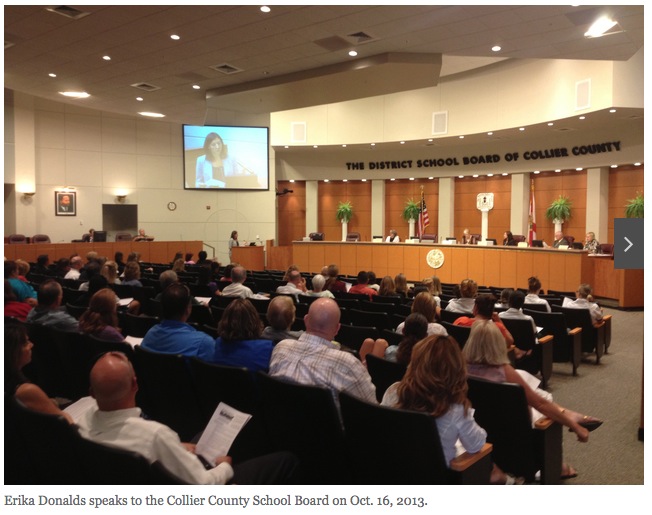 In addition to founding Parents ROCK, Ms. Donalds was significantly involved in the formation of Mason Classical Academy, a Hillsdale College public charter school that opened in Collier County last month. Her husband Byron is Vice President of MCA’s Governing Board. According to her bio on the website of The Joe Whitehead Show, Ms. Donalds also serves on the governing board of the Collier Freedom Council, as the Treasurer for the Collier County Young Republicans, and as a Precinct Committeewoman on the Collier County Republican Executive Committee. She is also involved with the Naples Tea Party, the SWFL Citizens Alliance and the Republican Women’s Club of Naples.

Her bio also says, “As a grassroots activist, Erika has worked on a number of campaigns and was the Campaign Manager for her husband Byron Donalds’ campaign for US Congress in 2012.”

Ms. Donalds has said if she is elected, she will not be involved in any volunteer organizations. However her leadership, vision and passion for Parents ROCK cannot be denied. She is the one who brought the group together. She is the one who directed its activities. She is also the one who is providing guidance about how parents can opt out of testing.

I certainly have no problem with grassroots activism; I’ve been a grassroots organizer myself. But I do have concerns with the possibility of the founder/leader/visionary of a group that is suing the School District and the School Board serving on the very Board she is suing.

The importance of the race for the District 3 School Board seat between Erika Donalds and Kathy Ryan cannot be overstated.

I strongly support Kathy Ryan and urge you to do all you can to help her get elected.

In particular, letters to the editor would be very effective. Email your letter (250 words max) to letters@naplesnews.com or submit it online at http://www.naplesnews.com/send-a-letter/.

If you share my concerns, please forward this email to other voters in your circles of influence. Let them know their vote is important – and why. Ask them to vote for Kathy Ryan for School Board District 3.

Thanks for your interest in our schools.