This guest post by Susan Calkins provides excellent background for voters’ decision-making about Amendment 1, The Florida Water and Land Conservation Amendment. Ms. Calkins is a retired professor of anthropology/sociology, Florida Master Naturalist engaged in environmental policy issues, graduate of the Greater Naples Leadership Master’s Program, and recipient of 2007 Jefferson Award for Public Service. The post appears here with her permission, because I too will vote yes on Amendment 1. But its appearance does not constitute Ms. Calkins’ endorsement of any of my past or future posts.

The citizens of Florida have long been committed to the protection of the natural resources of their state, a state soon to be the third largest in the nation. Article II, Section 7 of the Florida constitution states, “It shall be the policy of the state to conserve and protect its natural resources and scenic beauty.” For years, voters have supported funding to do just that.

In 1972 the Florida Legislature passed the Land Conservation Act, creating the Environmentally Endangered Lands (EEL) program, designed specifically to “protect environmentally unique and irreplaceable lands.” In 1979 this program was replaced by the Conservation and Recreation Lands Program (CARL), which established a land acquisition/management advisory council and made other significant administrative changes to the program.

In 1981, at the urging of Governor Bob Graham, two more programs – the Save Our Coast and the Save Our Rivers – were established to fund the purchase of critical coastal lands (SOC) and the acquisition and restoration of water resources (SOR). The SOC program resulted in the purchase of more than 73 miles of coastline and thereby significantly increased the number of coastal state parks. The SOR program largely funded Everglades restoration efforts.

By 1989 Florida was experiencing a major population “boom.” Irreplaceable, sensitive environmental lands had begun to disappear at an alarming rate. The pace of land acquisition, hampered by the year-to-year funding mechanism, could not keep up with development.

In response, Governor Bob Martinez appointed a Commission on the Future of Florida’s Environment. The Commission concluded that at the current rate of growth, the state would lose 3 million acres of wetlands (our freshwater recharge areas) as well as over 500 endangered and threatened species. They advised a more aggressive source of funding for conservation was needed. Consequently, in 1990 the Legislature approved the Preservation 2000 Act that provided for the sale of $3 billion in bonds over a 10-year period, providing $300 million per year from 1991–2000. The program was not only successful, preserving almost 2 million acres of land for conservation and resource-based recreation; it had the strong support of the general public.

In 1999 the Florida Legislature, with the support of Governor Jeb Bush, passed the successor to the Preservation 2000 Act — the Florida Forever Act. Although using the same source and amount of funding ($300 million a year), this new act made several changes to the previous program. Besides organizational changes, there was a greater emphasis on water resources and supply, and a new emphasis on purchasing conservation easements on lands such as existing farm and ranch lands.

Like its predecessor, Preservation 2000, Florida Forever was popular with the citizenry, no doubt because Florida was still losing land to development at a rate of nearly 500 acres per day. Hence in 2008, the highly successful Florida Forever program was reauthorized at the amount of $300 million per year for another ten years.

However, the Great Recession saw the Florida Forever program decimated; in 2010 funding for the program was cut by an estimated 95 percent. During the 4 years of Governor Scott’s administration, the Legislature diverted conservation trust fund dollars elsewhere, primarily to the newly created Department of Economic Opportunity. 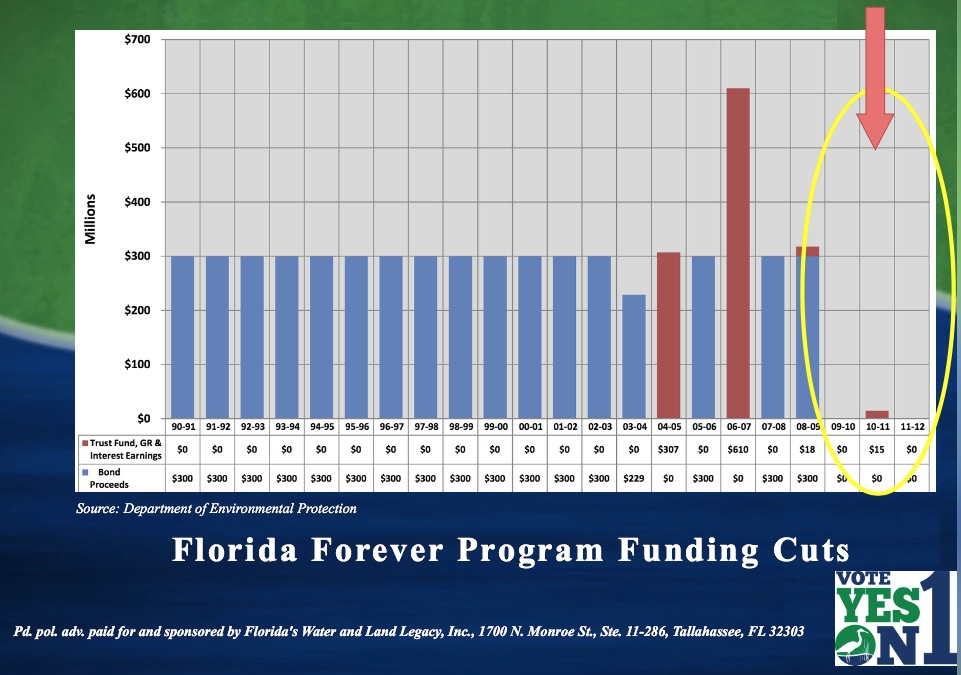 Between 2011 and 2014, just less than $29 million went to Florida Forever conservation projects. Protection of our waters and environmentally sensitive lands appeared to have lost the bipartisan support it had enjoyed for so many years. And just at a time when conservation lands were more affordable.

In response, a coalition of civic and environmental organizations created the Florida’s Water and Land Legacy campaign to petition for a constitutional amendment, which would dedicate 33 percent of existing real estate transfer fees (“doc stamp” tax) toward water and land conservation.

Approximately a million Floridians signed petitions to put the Florida Water and Land Conservation Amendment on the Nov. 4 ballot.

If passed, Amendment #1 would dedicate less than 1 percent of the state’s annual budget to conservation. The amendment does not create a new tax. And it is of limited duration, expiring in 20 years. It does not change or affect land use regulations; it is only a funding source.

SUMMARY: Funds the Land Acquisition Trust Fund to acquire, restore, improve, and manage conservation lands including wetlands and forests; fish and wildlife habitat; lands protecting water resources and drinking water sources, including the Everglades, and the water quality of rivers, lakes, and streams; beaches and shores; outdoor recreational lands; working farms and ranches; and historic or geologic sites, by dedicating 33 percent of net revenues from the existing excise tax on documents for 20 years.

Do we need this amendment now?

Yes. We can no longer afford to have the conservation and protection of our natural resources dependent upon the whims of the Legislature. Remember, we will soon be the third largest state in the U.S.; in fact, we may be right now. Our rapid population growth has continued to put tremendous pressure on our natural resources, and the task of protecting them is more critical than ever.

The Florida Forever program has identified over two million acres of environmentally sensitive lands still in need of protection – among them lands necessary to protect water quality. Since the vast majority of Floridians get their drinking water from groundwater sources, conserving our wetlands, and the lands which buffer our springs and rivers, is essential to us.

Unfortunately, a recent report from the National Oceanic and Atmospheric Administration identified southwest Florida as a “hot spot” for recent wetland loss. These wetlands are vital; they trap floodwaters, recharge groundwater supplies, remove pollution and provide fish and wildlife habitat. One-third of Floridians are dependent upon our most precious and endangered wetlands, the Everglades, for their drinking water supply.

In addition, most of our bays and estuaries, rivers and lakes currently do not meet the State of Florida 2010 water quality standards for safe public use. Locally, Naples Bay is an impaired (polluted) water body under both the federal Clean Water Act and the Florida Watershed Restoration Act (F.S. 403.067). And polluted waters (think toxic algae blooms) have been tied to the death of scores of dolphins, birds and other wildlife, not to mention a record number of manatee deaths (829 last year). These impaired water bodies not only threaten our wildlife and our quality of life; they also put Florida’s 65 billion a year tourism industry at risk.

Wetland areas and water bodies like Naples Bay can be restored and protected — but it is a costly task. We have accomplished a great deal as a state when it comes to protecting our natural resources and our scenic beauty. But we still have work to be done.

If we want to save our “paradise” for ourselves and for future generations, we need 60% of voters to say YES to Amendment #1, the Florida Water and Land Conservation Amendment. YES.