Skip to content
The August elections are behind us, and I assume you’ve seen the results. In this post, I’ll just recap the races and issues that were on Collier voters’ ballots and link to related news articles for color and background. Then I’ll share my thoughts about voter participation and look ahead to the November elections.
The results: Statewide races
For an insider recap from Marc Caputo and Matt Dixon at Politico Florida, click here — it’s worth the read!
The results: Local races
The results: Referenda
My thoughts about voter participation
For purposes of Sparker’s Soapbox, I’m more interested in voter turnout than I am in who wins. And before I dug into the numbers, I was feeling pretty good about the results. The Naples Daily News reported “voters exceed primary turnout predictions,” and statewide turnout was the “highest for a midterm primary since 2002.” (Voter turnout is defined as ballots cast divided by eligible voters as of the bookclosing date.)
But here are the unofficial voter turnout figures as of today: Collier County: 33.6 percent; Florida: 27.4 percent. They may be near-records, and it’s certainly better than 2014, but it’s still pathetic.
In addition to voter turnout, I look at “voter participation,” which I define as ballots cast divided by eligible voters on a race-by-race basis. For example, in a closed Republican primary, I look at the bookclosing number of registered Republicans in the district. Just as I found in 2014 (see Reflections on Tuesday’s Elections), voter participation is even more disappointing than voter turnout, because of under-voting. 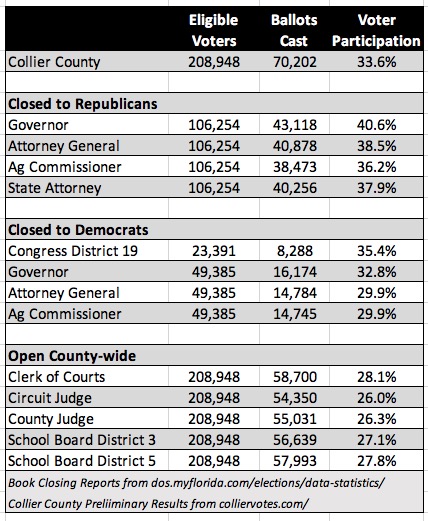 Under-votes reflect the fact that not everyone who casts a ballot votes in every race on her/his ballot. Reasons might include not wanting to make an uneducated choice, not liking any of the choices, or simply “ballot fatigue” resulting from a lengthy ballot.
As in 2014, Republican turnout is better than that of Democrats, and participation of those who are neither is lower than both, bringing down countywide results. Participation in school board and judge races is among the lowest in the primaries.
While I am dismayed by these results, it makes me more determined than ever to keep doing what I’m doing in Sparker’s Soapbox. I just wish more voters were regular readers.
In the coming days, there will be more analyses of the results of these races, and predictions for November. I’ll share the particularly interesting ones in upcoming Month-in-Review posts.
Looking ahead to November
I wrote previously that, while I understood Vote By Mail voters’ reasons for wanting to mail their ballots as soon as they received them, I cautioned against it. I said there were often last minute developments that might affect how one might vote, and I urged waiting as long as possible.
These were some late-breaking developments that might have affected voters’ decisions in these primary elections:
On November 6, we’ll have the opportunity to vote for a U.S. Senator and Congressmen, Governor and Cabinet, State Senators and State Representatives, State Attorney, Public Defender, County Commissioner, members of Fire District Boards and other local bodies, and judges. We’ll also vote on a number of proposed amendments to the Florida Constitution and a County sales surtax.
Many of the races will be very expensive and in some cases nasty, and a lot of dirt is likely to be dished. As I did this time, I’ll likely hold off on mailing my ballot until the last minute.
Between now and then, I’ll research the races that will be on our ballot. I will again ask: Who are the candidates? What are their educational background, work experience, history of community service, and sources of campaign funds? Most importantly, why are they running, can they win, and what will they do if elected? I’ll also research the proposed amendments and sales tax. And I’ll share what I learn on Sparker’s Soapbox.
Stay tuned — and help spread the word.