Skip to content
It’s hard to believe I haven’t posted on Sparker’s Soapbox since my last post in December. In case you’re wondering, I’ve continued my grassroots work to support the legislative agenda we worked so hard for in 2012, through a new group called Organizing for Action.
But before I tell you about that, let me close the loop on Medicaid expansion in Florida, the subject of my last blog post.
In a nutshell, the Florida Legislature tried to do something to help Florida’s uninsured in the session just ended, but ultimately failed.
The House rejected $51 billion of federal assistance to provide coverage for 1.1 million low-income working citizens over 10 years. Wanting nothing to do with federal money, they proposed a $3 billion 10-year plan paid for with state money that would have covered only 115,000 people. Refusing to compromise with the Senate, which would have used the federal money to help the uninsured purchase private insurance, the legislative session ended with nothing done.
Efforts are underway to urge Governor Scott to call a special session to reconsider, but I think it’s unlikely. So hospital emergency rooms will continue to treat the uninsured, passing costs along to insurers and ultimately, to us customers.
More on what we’ll be doing locally to help the uninsured sign up with the Federal insurance exchanges in weeks to come.
Organizing for Action 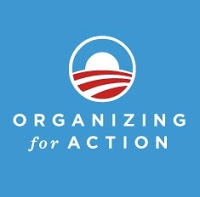 Meanwhile, in January, Organizing for Action was formed as a national group to advance the policies that the American people voted for in 2012, like gun violence prevention, comprehensive immigration reform, affordable health care for all citizens, and measures combating climate change.

OFA teams have been forming across the country, including OFA-Naples, which we formed locally.
We in OFA-Naples are working in coordination with OFA-Florida to engage and organize concerned citizens to advocate for issues we care about. Since January, we’ve held lively monthly dinners bringing like-minded people together in a social setting and sharing presentations on topics including gun violence prevention and the Affordable Care Act.
In March, we began to reach out to the broader Naples community. Chris Straton, a founding member of OFA-Naples, and I wrote a Guest Column for the Naples Daily News on the third anniversary of the Affordable Care Act, pointing out the good things Obamacare already does.
We held rallies in support of gun violence prevention in April, receiving great coverage in the Naples Daily News (articles here and here), and on FOX4 TV (video clip here).
This Thursday morning, OFA-Naples volunteers and supporters will deliver petitions to Congressman Mario Diaz-Balart’s office in support of background checks on gun sales. If you live in District 25 and want to join us, click here.
OFA-Naples Comprehensive Immigration Reform Campaign co-lead Monika Ludwig wrote a guest column for the Naples Daily news that was published yesterday. We showcased Monika’s article on our new OFA-Naples website and blog! Click here to follow this blog and receive notification of new posts by email.
This Thursday afternoon, Victoria Kirby, OFA-Florida State Coordinator and I will lead an Update on  the Gang of Eight’s immigration reform bill and Action Planning Session. Even if immigration reform isn’t you’re number-one issue, the meeting will be a great opportunity to meet Victoria and hear first-hand about OFA-Florida. For more information, click here.
Our next OFA-Naples dinner will be on Wednesday, June 19. Click here to request an invitation!
Going forward, I’ll be focusing on the OFA-Naples blog. My hope is to inform and educate readers about the President’s agenda, providing facts and information you might not otherwise see. I won’t hide my politics – readers will know where I’m coming from – but I’ll endeavor to write the truth.
Thank you for being a reader of Sparker’s Soapbox. I’ll be back from time to time, I’m sure. But if you’re interested in following me on my new  OFA blog, click here to subscribe.