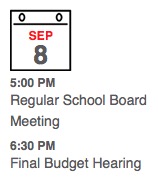 There are three hot items on the Agenda for the Collier County School District (CCPS) Regular School Board Meeting on Tuesday, September 8, beginning at 5:30 PM:

Highlights of what’s at issue with each of these items follow.

My hope in writing this – as with all my pre-Board Meetings posts – is that you will let Board members know your views on these matters either in person or by email before the meeting. Email addresses are at the end of the post.

The Blue Zones Project was first discussed by the Board at its August 11 Meeting. From my pre-meeting post:

Last October, NCH Healthcare System, Blue Zones, LLC and Healthways announced the launch of the Blue Zones Project® of Southwest Florida. According to the press release:

At the August meeting, several public speakers and Board members Erika Donalds and Kelly Lichter expressed strong opposition to the District’s participation in the Project. See Naples Daily News “Board balks at school inclusion in Blue Zones.” While expressing support, Board member Roy Terry wanted to know how participation would affect District staff. Chair Kathleen Curatolo and Board member Julie Sprague also supported the District’s participation in the Project, beginning with a four-school pilot. The Board agreed to bring the item back for a vote at the September meeting.

I agree with the Naples Daily News Editorial “Collier School Board should support Blue Zones agreement,” which concluded:

Promoting well-being among those who will be around for generations to come makes sense. That’s why we urge the School Board to sign on, then move forward in addressing testing, classroom learning and budget oversight.

Don’t let an angry, vocal minority drown out the majority’s voices of reason. Email School Board members today that you support the Superintendent’s recommendation to participate in the Blue Zones four-school pilot project.

This one-page policy has been before the Board several times since February; this is the second time it is being heard as a First Reading. Past controversy about the policy concerned how suggestions for new policies or revisions to existing policies were to be made, specifically in the case of a Board member suggestion that the Superintendent did not support.

The Executive Summary of this item on Tuesday’s Agenda says this revision is necessary to align this policy with other policies and with the Board’s Bylaws. If that’s all that’s behind this, the item should move forward to a Second Reading with little discussion. Stay tuned.

“Tract K” is an 11.6-acre parcel of land on Marco Island that was gifted to the District in 1989 by the Deltona Corporation, the developer of Marco Island. According to a 2006 Naples Daily News article, the then-president of the Marco Island Civic Association said it was the intent of the donor that the land be used for the benefit of citizens, and that the documents related to the transfer referred to the parcel as a “school site.”

The parcel has a long history of failed attempts to develop it. A search on the Naples Daily News website shows that in 2006, the Marco Island City Council wanted to buy the land. (More here). In 2008, a Marco Island resident and then-Superintendent Dennis Thompson wanted to put solar panels on the land and use them for energy production. (More here.) In 2010, the the land was wanted for a charter high school, but some Marco Island residents urged instead that Conservation Collier buy the land to protect nesting American Bald Eagles there. (More here.)

In 2011, the District leased the land to the Marco Island Eagle Sanctuary Foundation (Foundation) for $30,000 per year; that lease expires in April 2016. At Tuesday’s meeting, the Board will consider two competing proposals for the land:

If approved, Collier Charter Academy, operated by the for-profit management company Charter Schools USA, would open in August 2016 under a five-year contract. The Charter would enroll 661 students in grades K through 6 in its first year, expand to grade 8 in 2018, and have a student population of 1,145 by 2020, according to an article in the Naples Herald.

District staff recommends approval of this application. As I’ve written in the past, the District has little discretion over the approval of charter school applications that meet state requirements.

Gulf Coast Charter Academy is a tuition-free charter school in the City of Naples for students in grades K through 8. Its current contract with CCPS will expire in June 2016, and it is requesting a one-year extension. According to the Executive Summary, “The District needs to maintain consistency of review and renewable timetables in all of its Charter School contracts,” and as a result, the District recommends that the Board deny the contract extension request.

A July NDN guest commentary by Board Chair Curatolo provided an excellent review of the District’s budget since the 2007 economic downturn. The District has also provided good background information, including 10-year historical data on the value of the District’s tax roll (property value upon which the School tax is levied) and millage rate:

The proposed 2015–16 millage rate and budget were presented to the public and the Board at a Tentative Budget Hearing on July 28. (PowerPoint here.) They will be presented for final approval on Tuesday.

The budget being presented for approval is $977 million.

As was to be expected, many public speakers and the two newest School Board members spoke against the District’s proposals at the July meeting (Naples Daily News article here). I expect the same this week.

Please take a few minutes to share your thoughts about any of these items, but especially the Blue Zones Project, with Board members and Superintendent Patton:

If you attend the meeting, please wear BLUE to indicate your support of the Blue Zones Project.