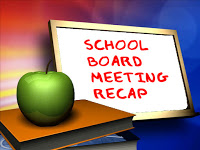 In last week’s post, I shared my hopes and what I’d be looking for as I watched the July School Board meeting. In this post, I’ll tell you what happened. Several important matters will come back for a vote in the coming months; I’ll tell you what they are. You’ll want to email Board members with your input.

Governance Model Review
I had hoped the Board would unanimously support Board member Julie Sprague’s suggestion to hold a meeting to discuss the Governance Model, led by a facilitator acceptable to all five Board members. Unfortunately, that didn’t happen.

As soon as the item was introduced, Board member Erika Donalds proposed, and Board member Kelly Lichter seconded, a motion to discuss the Model as part of an already-scheduled Policy Work Session, not in a separate, facilitated meeting. After discussion, Donalds’ motion passed 3-to–2, with Board member Roy Terry joining Donalds and Lichter, and Sprague and Board Chair Kathleen Curatolo opposed.

The Governance Model will be added to the agenda for the August 18th Work Session on Board Policies. That agenda is already quite full, with more than 15 policies to be considered, so it will be another late night.

Curatolo asked Board members to seek input from the public. If you want the Board to work together differently than they have been these past months, please take a few minutes to read the Governance Model. Then share your thoughts, concerns and suggestions with the Board members. Their contact information is at the end of this post.

Outside Counsel for the Board
For background for this item, see last week’s post.

As soon as the item was introduced, Lichter made a motion, seconded by Donalds, to amend the current contract with District General Counsel Jonathan Fishbane so that he reports to the Board, not the Superintendent. If a conflict of interest were to arise, they want it to be the Superintendent who has to hire outside counsel, not the Board.

The discussion was generally respectful, but no minds were changed. Lichter’s motion failed, 2-to–3, with Curatolo, Sprague and Board member Roy Terry dissenting.

Contrary to my hope that this would put the matter to rest, Donalds later wrote in an email to supporters that “we can expect that this will continue to be an issue.”

School Board Self-Evaluation
As I wrote last week, Sprague proposed this agenda item because of the poor marks the Board gave on its self-evaluation in May. See my post of June 3 for details. I hoped the Board would unanimously support the motion, and that they would do so without making any changes to the evaluation instrument, so that a like-for-like comparison would be possible.

As soon as the item was introduced, Donalds proposed, and Lichter seconded, a motion to discuss improvements to the evaluation instrument to be used next year, rather than conduct another evaluation using what they consider to be a flawed instrument in November.

Curatolo said she’s not opposed to reconsidering the evaluation instrument at a later date, but that she thinks it is “important to utilize baseline data” and to reevaluate in November as proposed. Terry said he sees value in doing the same evaluation again, but not discussing it at a Board meeting. “Our Board meetings are long enough,” he said.

This is not the first time Curatolo has shown that she is listening and seeking ways to compromise. That’s the kind of behavior I’d like to see from all the Board members. Had Donalds seen it as such, she might have proposed an amendment enabling the Board to approve the motion unanimously: adding a commitment to discuss revisions to the evaluation instrument as part of the strategic planning process.

Instead, Terry’s amendment – that the evaluation be conducted using the same instrument, with results to be reviewed at the November Board Work Session – was accepted, and the final motion passed 3-to–2, with Donalds and Lichter opposed.

Preliminary 2016 Florida Legislative Platform
In my last post, I shared the District’s five proposed priorities for the 2016 State Legislative Session.

At Tuesday’s meeting, the discussion focused mainly on changes to the draft to better convey the District’s desired changes to two of the areas of concern: the state-mandated accountability system (i.e. testing of students), and use of the value-added model (VAM) in teacher and school administrator evaluations.

This may be one of the most important areas of education policy facing School Boards and state legislators today.

Topics discussed included computer-based versus paper-and-pencil-based testing, and the use of state versus local versus nationally-normed tests, as well as pros and cons of each. Not surprisingly, while Board members don’t like the current state mandates, they don’t agree on what they would do instead.

They did agree that they like the option of “local control,” and directed Ian Dean, Executive Director of Human Resources, to bring a revised draft reflecting the Board discussion back for further consideration and approval at its August 11th meeting.

By listening to this discussion, I had hoped to gain better understanding of those things the state controlled and those controlled by the District, and I did. I am also beginning to understand the educational policy issues and differing views of the Board members.

According to old adage, “Be careful what you wish for; you just might get it.” Clearly there’s a problem with the current state mandates, but if the Board votes to decentralize control over testing and teacher evaluations, what will that do to our ability to benchmark CCPS against other Districts? Who will develop the tests, or decide which tests will be used, and based on what criteria? How and when will local teachers’ and administrators’ input be requested and accommodated? The devil is in the details.

I hope many community members, parents, teachers and administrators give input to Board members on this important policy matter in the short time between now and the August 11th Board meeting.

Board Member and Superintendent Comments
Again this month, despite the late hour, much of importance was addressed during this final, open-ended part of the meeting.

Invocations at Board Meetings

Earlier in the evening, during Public Comments, Collier Resident Jerry Rutherford, president of World Changers of Florida and a long-time advocate for prayer in the schools, requested permission from Chair Curatolo to “offer a prayer for the School Board.” In consultation with District Counsel Fishbane, permission was granted, with the understanding that Rutherford’s prayer would be part of the three minutes he, like any member of the public, had to address the Board.

Addressing “Almighty God and Our Heavenly Father,” he offered a specific prayer for each Board member, the Superintendent, and the District Counsel – by name, and concluded by saying, “So be it. In Jesus’ name.” (YouTube clip here.)

As the first item of Board Member Comments, the Chair asked Counsel Fishbane to provide some history on the matter of Invocations at public meetings. He did so (YouTube clip here), concluding that the constitutionality of Invocations at School Board meetings had not yet been decided by the U.S. Supreme Court. As a result, he said, should CCPS decide to allow the practice, it would risk being sued. He then recommended a number of guidelines that should be followed if the Board decided to proceed. (YouTube clip here.)

Board members agreed to decide the matter at its November 17th organizational meeting. Curatolo urged them to do their own research, read relevant legal cases, and talk to community members – another important opportunity for you to weigh in.

Superintendent Patton serves on the steering committee formed to help develop a strategy for the community to become a Blue Zones community (see February article in the Naples Daily News), and Curatolo wants to learn more about the matter at an upcoming Board Work Session. Lichter and Donalds expressed reluctance. After discussion, the Board agreed to add the item to the agenda of its October 20 Work Session.

Let your voice be heard
As described above, the Board seeks input from the community on several matters they will be deciding in the coming months:

Given the importance of these matters to the governance, effectiveness and competitiveness of our District, I hope you will take time to consider each of them and share your thoughts with Board members and the Superintendent:

The agenda for the next Board meeting should be available online this Wednesday, August 5.