With all attention focused on next month’s presidential and, to a much lesser extent, Florida U.S. Senate races, one would think that’s all there is. But after looking at my sample ballot and spending a morning last week on the Collier County Supervisor of Elections and Florida Division of Elections websites, I learned there’s much more at stake. In this post, I’ll give an overview of what will be on the ballot of Collier County voters, and in future posts I’ll share my research about some of the choices we will have to make.

Of course, we’ll be choosing the next president. On your ballot – in this order – will be:

We will also be electing one of Florida’s two U.S. Senators. On your ballot will be incumbent Republican Marco Rubio, Democrat Patrick Murphy, Libertarian Paul Stanton and four No Party Affiliation (NPA) candidates.

Florida House: Collier County voters live in either House District 80 or House District 106. Find your district here. Both these elections were essentially decided in the closed August Republican primaries, due to a “write-in” loophole I wrote about in July. If you live in District 80, you will have the choice of Republican Byron Donalds or a space to write-in the name of someone else.  If you live in District 106, your choices will be Republican Bob Rommel or “write-in.” This picture shows what the choice looks like on my ballot. 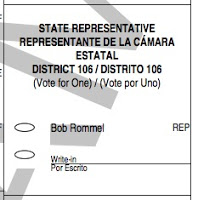 Since voters really have no say at this point, despite these seats being on the ballot, I won’t be writing more about them than I did when they were Republican primary candidates here.

Florida Senate: As the result of the recent redistricting, all Collier County voters now live in new Senate District 28. As with the Florida House, the Florida Senate race was essentially decided in the primary won by Republican Kathleen Passidomo. You can learn more about her in my post here.

Board of County Commissioners: Collier County is divided into five county commission districts, each of which is represented by a commissioner elected to a four-year term by voters in that district. Find your district here.

Commissioners for Districts 1, 3 and 5 are elected in presidential election years; those for Districts 2 and 4, in midterm election years. For District 1, incumbent Republican Donna Fiala, in office since 2001, had no challengers so was automatically reelected. In District 3, Democrat Annisa Karim is facing Republican Burt Saunders for the seat held by Tom Henning since 2001. In District 5, Democrat Tamara Paquette is facing Republican Bill McDaniel for the seat held by Tim Nance since 2013. I plan to write about these two important County races in the coming weeks.

Constitutional Officers: Collier County’s five constitutional officers (i.e. elected officials whose office is mandated by the state constitution for non-charter counties like Collier) are elected to four-year terms in presidential election years in county-wide races. This year, only one of the five will be on the ballot in November: the Sheriff.

Those that will not be on the ballot are the Supervisor of Elections, Tax Collector, Property Appraiser and Clerk of Courts:

For Sheriff, incumbent Kevin Rambosk, Republican, in office since 2009, is being challenged by NPA candidate Carlos Gutierrez.

In Collier County, fire and emergency management services (EMS) are provided in a fragmented way that has long been the subject of criticism yet resistant to change. In 2006, a fellow member of the League of Women Voters of Collier County and I presented “County-wide Fire and EMS Service: An Idea Whose Time Has Come?” which provides an overview helpful to understanding the transition now underway.

As the result of referenda on the 2014 ballots of voters in several of the fire districts, fire service today is provided by five separately-managed fire departments:

Three of the five Fire Districts are overseen by elected Commissioners and of these, two have Commission seats on the November ballots of those who live in them: Greater Naples and North Collier.

Greater Naples (4 of its 8 seats on the ballot):

North Collier (4 of its 8 seats on the ballot):

Only one candidate qualified to run for North Collier Seat 5 and for each of the three (of five) Immokalee Fire District seats up for election, so they are automatically elected. The Naples and Marco Island Fire Districts are overseen by their respective City Managers. 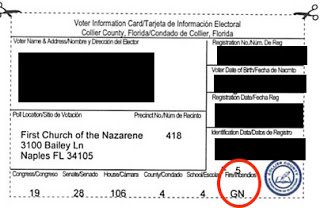 Will you have Fire Commission seats on your ballot? There is no “Find Your Fire District” web page, for some reason, so the easiest way to know is to look on your Voter Information Card. The photo of mine, at right, shows that I live in the Greater Naples (GN) District.

If you live in either the Greater Naples or North Collier Fire District, the next step is to find out which pre-merger District you live in, since that determines which of your District’s seats you can vote for. It’s a bit confusing while the consolidations are being phased in, so be sure to learn which seats will be on your ballot before its time to vote. How? Look at your Sample Ballot.

I hope to write more about the Fire Commission races in a future post. Meanwhile, I recommend “Shouting ‘Fire’ in Collier County,” by Dave Trecker, local blogger and vice president of the Collier Citizens Council, for a report on the recent Fire District candidate forums.

The five members of the Collier Mosquito Control Commission are elected on a nonpartisan basis to four-year terms by voters District-wide. The District covers 401 of the County’s 1.475 million acres, including areas encompassing Naples, Golden Gate, the Estates, Marco Island and Immokalee. More here. If you live in the District, you’ll choose in November between the incumbent and two challengers for each of two seats.

The Collier County Soil & Water Conservation District is one of 62 such Districts in Florida. Two of the five supervisor seats are up for election this year, and the incumbent is unopposed in one of them. Voters will choose between incumbent Jim Lang and a challenger.

There will be four proposed amendments on the November ballot. The League of Women Voters of Florida has published a nonpartisan Voter Guide to the Amendments that provides a synopsis of each, explains what yes and no votes would do, and lists supporters and opponents of each. I hope to write more about the amendments in a future post.

Collier voters will have the opportunity to vote for or against the retention of three Florida Supreme Court Justices and ten Judges of the Second District Court of Appeal. The League of Women Voters of Florida’s nonpartisan Voter Guide to Supreme Court Justices the includes brief bios, key cases and FAQs provided by the Florida Bar that should be very helpful in deciding how you will vote. For information about the Second District Appeals Court judicial retention decisions, consider this information from Ballotpedia.

If you can believe it, these are not the only choices Collier County voters may have on their November ballots. But they are the ones facing most of my readers. Vote By Mail ballots will be going out soon, the last day to register is October 11 and early voting begins October 24.

I hope you can see how important it will be that you do some homework between now and November 8 so you will be an informed voter, and that you will be on the lookout for my future posts.